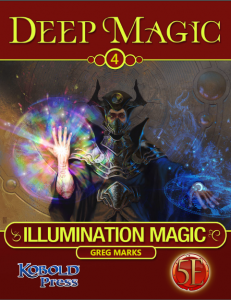 This school of magic, associated with light and school, if fittingly represented by just that, the school of illumination. At 2nd level, costs and time to copy illumination spells to the spell-book is halved and additionally, you can forecast danger in the next 24 hours by studying the stars for 1 hour. This nest advantage on up to 2 initiative checks, lasting for 24 hours or until the end of the next long rest. Alternatively, you may grant an ally said advantage, but then you may not benefit from it in that combat. The decision must be made before rolling dice. At 6th level, you gain a bonus of +1 to spell attack modifier and spell save DC in dim light or darkness – not the biggest fan of that one. At 10th level, illusions for which you lose concentration exist for another round, provided the spell’s duration has not elapsed. here’ I’d have referenced duration instead of maximum duration in the rules-lingo, mainly since maximum duration could be taken to mean a spell’s theoretical maximum duration, including increased spell-levels…but that is a nitpick and will not be considered for my final verdict. At 14th level, during a long rest, you can watch the stars, gathering ambient energy in a small item like a star chart or astrolabe. While holding said item, you can use a bonus action to expend the stored energy to duplicate one of the following: Alter self until the next long rest, net a creature in sight disadvantage on the next save versus an illusion or enchantment, reroll up to Intelligence modifier damage dice of a necrotic damage causing spell of 5th level or lower or, finally, treat a divination spell as though you had cast it using a spell slot one level higher.

The pdf also contains a new feat, namely Star and Shadow Reader: Upon taking the feat, choose necrotic or radiant damage: Your spells casting that damage ignore resistance, but not immunity, to the chosen type. Additionally, you can cast augury sans expending a spell slot once between long rests (which is very feeble, considering the spell’s ritual tag) and gain darkvision 15 ft. – or increase an existing darkvision’s range by +15 ft. The prerequisite is btw. the ability to cast at least one spell. I’m not a big fan here – ignoring resistance takes away from D&D 5e’s rock-paper-scissors type of gameplay.

Unless I have miscounted, we get a total of 21 spells: Black hand lets you fire a ranged spell attack, imposing disadvantage an attacks, ability checks and saving throws made with physical attributes. The effect can be ended via a Con-save at disadvantage. Not the biggest fan -the spell would be less open to weird uses if it was tied to the target. Black well has a massive range of 300 ft. and drags those within 90 ft. of it towards it on a failed Strength save. A target within the well is stunned on a failed Con-save and suffers necrotic damage, with a successful save reducing that to incapacitation. Creatures take no damage from remaining in the well, just from exiting it – and creatures within the well at its end land prone. This spell is a bit too strong – it’s AoO instant suck for all foes: The multiple saves don’t really help, considering how far the well drags targets. Even successful saves of those on which the well is cast lock them down. Cloak of shadow nets you advantage on Dexterity (Stealth) checks relying on sight.

Compelling fate is pretty cool: If the target fails a Cha-save, you get advantage on attack rolls, may mirror its movements on the creature’s turn (deducting that from your next movement) or use a reaction to grant yourself and all allies within earshot of the subject’s intentions, providing a +2 bonus to AC or saves versus the prompting attack. At 7th level spell level, starry wisdom lets you cast a reaction-based variant of the spell. Flickering fate, at 4th level, is interesting: You or a target touched can see fate: All creatures within range make Wisdom saves – on a failure, they need to declare their intended actions and then follow through on their turns -additionally, the recipient has advantage on attacks ability checks and saves and creatures affected suffer from disadvantage. Once again, I think this would have made more sense of the spell conveyed advantage only with regards to actions prompted by or against creatures actually affected by the spell.

Guiding star prevents you from being lost due to stars and sun – as a nitpick, I think the spell should specifically state that it can only work on open ground: While the spell’s flavor states that it works by tracking sun/stars, RAW, it can be cast underground and works – one could argue the tracking to be “magic” and thus feasible in such environments as well. Icy grasp of the ether, at 7th level, inflicts nasty cold damage and restrains the target and accumulates exhaustion of the target is not immune to cold and breathes. Orb of light blinds the target 1 round and deals 3d8 radiant damage, with a Dex-save to halve damage and negate blindness – compared to similar 2nd level spells, a well-balanced option. Shadow bite is a necrotic variant of acid splash that instead of targeting two creatures, halves the speed of a being affected by it until your next turn, with Con to resist. personally, I’d have reduced the damage dice since necrotic damage is slightly more valuable than acid, but oh well. Shadow blindness is one cool cantrip: It temporarily negates natural darkvision! Elegant and cool!

Shadow hands is another tweak: 1st-level spell, 15-ft.-cone, 2d4 necrotic damage + frightened on a failed Wis-save, which also potentially halves damage. Shadow trove lets you temporarily store items inside. Downside: “Items that are still inside the shadow trove when the duration ends are lost forever.” WTF? That’s 3rd level. Unwelcome artifact? Put it in the magic garbage disposal! Need to make documents disappear? there you go. Since only the caster and certain designated individuals can access it, that further exacerbates the issues. This spell needs a serious overhaul. Shield of star and shadow nets resistance to either necrotic or radiant damage and makes you shed dim light. Silhouette lets you do a magic shadow puppet show – decent cantrip. Slither temporarily makes you a shadow is cool in theory. However: “You are immune to all damage, except force, psychic and radiant damage.” WHAT THE EFFFF??? This is ridiculously potent for a 2nd level spell. Dragon breath? No biggie, I’ll go shadow. This needs to die in a fiery blaze. Or at least be seriously nerfed.

Starburst is a radiant-based cantrip for 1d6 radiant damage, range 60 feet. Starfall has a range of 60 feet and lets you cause 8d6 radiant damage to 5 targets within range, with hit targets blinded on a failed Dex-save, which also can halve damage. In spite of a slightly decreased damage output, this has: a) a better damage type than cone of cold; b) better control (no cone, choose targets) and c) no duration for blindness effect – as a whole, this makes the spell too strong for the level. The blindness effect should go, at the very least. Last rays of the dying sun first blasts for 6d6 fire damage, then for the same amount of cold damage in a 40-feet burst – at 7th level, a solid option. Summon star calls forth a deva that charms those that look upon it. Star’s heart, the 9th level spell, increases gravity within 50 feet – all creatures within drop objects held, become incapacitated and can’t move. Solid objects encountered triple fall/collision damage. Creatures within the area or entering it must save or suffer the same fate. Anyone starting the round prone takes bludgeoning damage and those than make their saves while prone take only half damage and may move at 1/2 speed. Big plus: Manages to get spell interaction, ranged weapons, etc. right.

We end the pdf with Talithe Val’Shiar, a sample challenge 6 NPC.

Editing and formatting are excellent on a formal level. On a rules-level, the language is precise as well, though balance-wise, I disagree with several choices. Layout adheres to Kobold Press’ two-column full-color standard and the pdf comes fully bookmarked for your convenience. The full-color artworks herein are absolutely gorgeous.

Greg Marks delivers a per se solid pdf here. There are quite a few aspects to like and enjoy within this supplement. At the same time, when compared to previous installments in Kobold Press’ Deep magic-series, this feels like it falls a bit flat. It does not sport the evocative visuals of Clockworks, the cool rune engine of rune magic or the impeccable balance of the void magic book. Ignoring resistances is a slippery slope and there are a few spells herein, where comparable PHB-spells are obviously worse. I also think that the celestial alignment-theme could have been more pronounced/better integrated in the material presented. As a whole, this is not bad – but it does have a couple of rough edges and a bit more “variant of spell x”-material than I expected. This is not bad, but compared to previous installments, it feels less compelling – my final verdict, as written, can’t go higher than 3.5 stars, rounded down for the purpose of this platform.