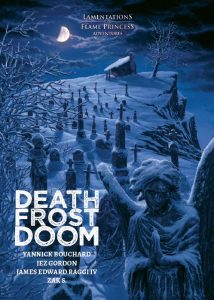 This review was sponsored by one of my generous patreons, who supplied the means to acquire this book for a review at my leisure. My review is mostly based on the hardcover-version of the module, though I have also consulted the pdf and checked its functionality. The review is based on the fourth printing of the module, annotated and expanded by Zak S..

First things first: This is a very dark module. If you can’t handle dark fantasy or really grim prospects, then this may not be for you. It is not a module I’d play with kids. (As if that needed to be said- the book’s called “Death Frost Doom”, for crying out loud…) There are two more things you should be aware of before we go into SPOILER-territory.

One, this module will probably create a significant array of fallout in your game and steer the plot well beyond the confines of its pages. PCs can spend a whole campaign dealing with the fallout…if they survive. This is deadly.

Two, if you’re a metalhead who enjoys the darker aspects of metal, then this module has its own soundtrack! I am not kidding. E.g. upon entering one of the rooms, the module tells you to put on Samael’s “Baphomet’s Throne.” Now, this is not gimmicky, mind you – you won’t find the like for every room…but personally, I enjoyed it. This, coincidentally, also serves as a Litmus test of sorts: The aesthetics of this module are very much indebted to black metal; the cold, screeching type. It’s basic premise could be summed up as: “What if an evil organization was actually effective and, aesthetics-wise, really, really EVIL and misanthropic and spiteful?”

That’s ultimately what the PCs will be up against. There is a reason “YOU ARE DOOMED” is written in big, fat letters on the back cover. The dungeon herein is a true hell-hole. PCs will quite probably die horribly unless they are really up to their A-game. This one is for the pros. Not for the “Advanced” gamer. Pros. Hardcore RPG enthusiasts looking for a brutal challenge.

Okay, so this is as far as I can conceivably go without diving into SPOILERS. If you’re a player, then may the gods have mercy on your PC. From here on out, only referees should read on!

There is a frost-covered mountain, and at its top, there is a cabin and a mausoleum. Death awaits. Even as the PCs approach the foreboding top, things may get nasty: Straying off the path can be a bad idea in these rugged climates…and as the PCs make their way to the top of the mountain, they encounter the axe-wielding hermit Ezekiel “Zeke” Duncaster – a truly eccentric and creepy fellow. The attention to detail here and throughout the book is btw. massive: Multiple options for using Zeke are provided for the referee. We get a table to determine his whereabouts and beyond brief stats, the referee gets guidance on likely venues of conversation. Zeke tells the PCs to go home, trying to restrain them via non-lethal means…but PCs being PCs, the chance is high that they’ll kill him or lie to him – after all, there are so many graves up there and Zeke spends all his days carving the names of the dead…so many.

At this point, some sensible groups may decide to go straight back where they came from. These groups, in my experience, are few and far in between. I mean, how bad could it be?

Worse. As the PCs approach the foreboding peak, they will realize that speak with dead is a bad, bad idea…possession is possible. Sleep offers only unreliable solace. The old hanging tree, while rooted, is possessed of a horrid, impotent malevolence. The frozen body of a mountain-climber can be found, his equipment being potentially crucial… Even the well is cursed…oh, and there is the cabin. The cabin that hides the entrance to the dungeon…and the place where the PCs can get a very good idea of HOW FRICKIN unhallowed this ground is. Crossing threshold? Notes for GM. Pretty much every object in the cabin has interaction notes for the GM. It is here that the book “That Which Was Given” can be found – and it contains the names of the fallen, oh so many…and notes on the true extent of the influence of the evil organization responsible for this vile fleck of frozen hell, the dreaded Duvan’Ku.

How evil are the Duvan’Ku? In the trophies of the cabin, the eyes of glass are actually souls in frozen time, left there to forever writhe in maddening torment. And it becomes worse in the dungeon under the cabin. Here, we get walls (depicted in hand-out style one-page artworks – much like many places herein!) of screaming faces…and then there is the grand, malevolent scheme: Upon entering the chapel of the complex, 12 skulls of ice, hanging from the ceiling, will slowly, inexorably, fall and shatter, counting down in intervals of 10 before the big, campaign-changing event takes place.

You see, the complex is lavishly detailed (playing different tunes on an organ can have dire consequences for players who think they are clever: Music pieces can provide significant edges when found, but pretty much all chimes and sound-sequences you can find in the module (even that of the cookoo-clock) have been covered…and meta-jokes (because we know players will try…) also have effects. Hint: Playing “In a Gadda da Vida” makes for a pretty…ehem…memorable result. Speaking of memorable: This also holds true for the plethora of deadly traps and cursed items – though it should be noted that the “dickish insta-kill”-quota is pretty low – if PCs are finished off, it generally is the result of doing something less than wise.

But let’s get back to the aforementioned cataclysmic event – in order to enter the deepest recesses of the dungeon, the PCs will have to bypass (or kill) the sacred parasite, a combination of undifferentiated ectoplasm, unholy ice and liquid time as well as an unfortunate, whose fate at the hands of the Duvan’Ku was even worse than that of their plentiful other victims. (And yes, reading up on that in the cult’s books can make you stark, raving mad…) – slaying this unfortunate THING exposes the pit – and in the original version, this is where things got a bit haphazard and deadly, envisioning, among the choices, the parasite as part of the nose mucus of an impossibly large giant, who’d awake upon intrusion – and waking this titan would instantly kill everyone. The revised option offers more suggestions here, but going down is still a bad idea…particularly considering that the death of the parasite’s death will cause the souls suspended in it to break free, animating the dead…for the dungeon, ultimately, is a mass-grave, horrid testament to the Duvan’KU’s vile deeds – and thousands (literally!) of undead will spew forth.

And then there would be the matter at hand that is the aforementioned sanctum beyond the parasite, where disturbingly rendered greater repugnances roam – the erstwhile leaders of the Duvan’Ku, vile and horrid undead monstrosities that provide a deadly array of potential bosses, which partially should be considered to be puzzle combats: Limited omniscience, a foe that demands an oath each round (and not keeping them sends you straight to hell…) and an inquisitor, whose questions can cause damage to those replying – these horrid beings make for twisted and disturbing foes – and ultimately, the mighty Praetor-Pontifex awaits to lead his legions into battle once more. Hint: No, chances are that your PCs will not stand a chance against the tide of the living dead and this powerful undead…so yes, they may have to strike a devil’s bargain…or flee in horror.

On particular aspect of the module is btw. interesting: It makes great use of the blending of in- and out-game behavior: If PCs and players read aloud certain chants and promises, they will be in for a rude awakening. It should also be noted that the hand-out maps that the PCs can find actually have been reproduced here. the attention to detail goes so far as to provide a massive 100-entry-table of effects for a magical drug…and, enjoyably, the book ends with a nice little retrospective, including artworks and cover artworks of previous iterations.

Editing and formatting are very good – apart from some minor typo-level glitches, I encountered no problems. Layout adheres to a nice and elegant 2-column b/w-standard and, like most OSR-books, the file is intended for 6” by 9” books. The artworks and cartography in b/w by Jez Gordon are really neat – while no player-maps have been provided, that’s because they can’t really find them, apart from the handout, which ticks off that box as far as I’m concerned. The cover art by Yannick Bouchard perfectly encapsulates the flair of the module.

James Edward Raggi IV’s “Death Frost Doom”, with the options and additions by Zak Sabbath, makes for a rather amazing module. If you like dark fantasy and really challenging, brutal dungeons, then this will be a revelation for you. The amount of details, GM-guidance and the glorious tone of the adventure render it a true joy to run. This is a very deadly campaign-changer of a module, yes, but it is also one that drives home how dangerous and yes, nightmarish the job of being an adventurer can be. The bosses herein are glorious and so are several pieces of dressing, traps, etc. – in short, this is one impressive beast of an adventure.

It should be noted that, when playing e.g. Paizo- or WotC-material, you ever felt like “This is too dark”, then this may not be for you. Similarly, if you can’t take a character dying, this will not be for you. This is steeped in the aesthetics of Scandinavian, cold and misanthropic black metal and the sheer existence of the Duvan’Ku will make your campaign feel darker than it once was. But then again, light shines brightest when contrasted with pure, pitch-black darkness, right?

In the end, I absolutely adored this module. I understand what some people dislike about it, but personally, I consider it a dark fantasy milestone. My final verdict is 5 stars + seal of approval.

You can get this lethal, deadly monster of a module here on OBS!

You can get the print version here on LotFP’s store!