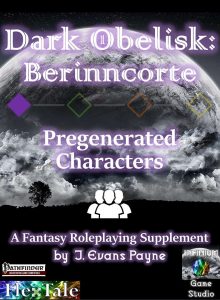 This collection of PWYW-pregens clocks in at 63 pages, 1 page front cover, 2 pages of editorial, 1 page ToC, 2 pages of SRD, 1 page blank, leaving us with 56 pages of content, so let’s take a look!

So, this would be the small “Pay what you want”-companion tome to its massive extended brother, a colossal pregen book for the Dark Obelisk AP, or, more precisely, its first chapter “Berinncorte” – in my review of the Player’s Guide, I briefly talked about the optional reward star character progression mechanic, so let me be brief: You award those for quest completion, defeating key bosses etc. – it’s basically an XP-less advancement method. I’d not the biggest fan, but thankfully, easy conversion mechanics are provided.

Since the Player’s Guide was system-neutral, I did not comment on another peculiarity of Dark Obelisk that very much becomes relevant here: Quadded statblocks. Instead of one statblock, each statblock in this pdf comes in 4 iterations, color-coded for your convenience: Low-level stats (level 1 – 4, up to CR 4), moderate level stats (levels 5 – 8, CR between 4 and 10), advanced stats (levels 10 – 15, CRs ranging from 10 – 15) and elite stats for levels 15+, with CRs ranging from 12 to 20. Now thankfully, these quadded statblocks retain PFRPG’s subsections – i.e. you’ll still have CR/XP first, then sex race class, initiative, etc. – in short, they require no getting used to.

The levels for the characters herein would be 1, 6, 10 and 14, respectively and the book does feature a bit of insight into design philosophy – while these characters work, they are not necessarily minmaxed or the like and they enjoy playing against the trope. Special abilities are listed for your convenience, meaning you won’t have to switch books, which is a nice plus. What’s bold is bolded, magic items are italicized – the formal criteria are surprisingly solid. While we do get e.g. Gronka Hackbang, the half-orc barbarian with Int 6 and Cha 8, e.g. Antagonize as a feat choice makes surprising sense when paired with an Intimidate that does not suck. So yes, I do believe that there is some story within these statblocks per se, which is a good thing since, unlike many a pregen-collection, we don’t actually get roleplaying notes or extensive background stories – these are the crunchy mechanics and that’s that. And yes, the pregens are effective at their respective roles, so min-maxers probably won’t have too much to complain here.

Beyond aforementioned barbarian, we get an elven bard, a half-elf cleric, a dwarven druid, a tiefling fighter, a hafling monk, a dwarven paladin, a halfling ranger, a human rogue, a gnome sorcerer and an elven wizard. gender-wise, we have a solid mix here. The builds per se are relatively solid, though they are not free of glitches – while I did not reverse-engineer all of the builds, e.g. the spell save DC is universally off by one: It was calculated with 11 as a base-line before adding the key attribute, when it should be 10 + attribute modifier + spell level. Similarly, the cleric e.g. does not state the chosen domain, which is puzzling, considering that e.g. the sorceror comes with the full bloodline info. It should be noted that the builds use PFU’s Artistry-skill, but not the Lore-skill.

The pdf closes with a sample, non-named quadded armored hulk barbarian statblock, including some nice ideas regarding how to play the character, how to use dressing, what the strengths and weaknesses are from a crunch-perspective – you get the idea. This would be basically a teaser for the expanded pregen book, where more such sections can be found. The pdf closes with a brief index.

Editing and formatting are good, though not perfect – while the formal criteria and formatting are surprisingly good, some minor build glitches aren’t so cool. Layout adheres to a full-color standard that puts either two columns of text or a quadded statblock in the center – there is no overlap between characters, which means that the final pages of some have a bit of blank space. Still, preferable to overlap. The pdf comes with a second, more printer-friendly, backgroundless version. EDIT: As per the posting of this review, a bookmarked version is being uploaded.

All right, so this is the PWYW-version, the freebie pregens for those who want them…and they are solid enough. While we get pretty much pure crunch and not much else, that’s as advertised and the statblocks for higher levels mean that GMs will have some nice stats for NPCs as well, if required. That being said, the glitches that I found do drag this down a notch. It also hits a big pet-peeve of mine: We don’t actually get the point-buy values used in character creation. Considering that plenty of groups use 25-pt. or 15-pt.-buy for high or gritty fantasy, respectively, getting that precise info and scaling advice would have been very much appreciated.

…I think I may have reached a whole new level of prickishness, complaining about a pretty hefty PWYW-pregen collection, but there we go: We also only get core classes here and one archetype’d character. Considering the wealth of options available for PFRPG, I know that my players refuse to play vanilla core characters. That may be a feature or a bug, depending on how you look at it, but at least some APG-support would have been more than expected – now, of course, those *can* be found – in the extended book! The high-level versions also tend to be pretty challenged regarding gear, usually sporting somewhat level-appropriate magical weapons/armor with the usual +1/+2/+3 bonuses – so expect nothing too creative there. In fact, the high level versions are SEVERELY underpowered.

Sooo…how do I rate this? Here, things get tricky. You see, the draw here would be the stats and they are plentiful, yes. And no, I don’t expect them to be flawless or anything like that…but frankly, I expect them to be a bit more transparent for the GM to modify. They are not totally bad, but neither will they blow you away. This is a decent pdf, and at PWYW, it certainly is worth checking out…but it is not a particularly artful collection of pregens, sporting several hiccups and issues – if you’d like to know which, I went into much more detail in my review of the extended pregenerated characters tome. Even taking the PWYW-nature into account, I can’t go higher than 3 stars on this.

You can get these pregens here on OBS for PWYW!