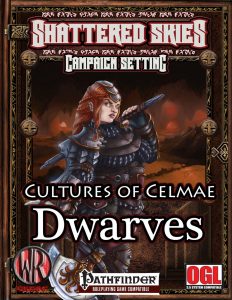 The 3rd installment of the Cultures of Celmae-series represents a change of focus; not only does the series move away from the pretty basic explorations of human ethnicities (though we’ll return to those), it also provides significantly more material – the pdf clocks in at 18 pages, 1 page front cover, 1 page editorial, 2 pages of SRD, 1 page back cover, leaving us with 13 pages of content – which is 10 more than the Majeed had.

The very first page depicts the Shattered Kingdoms as a whole with a solid full-color map and begins with a brief history of the dwarven people – speaking of shattering: The ingenuity of the dwarves, alas, was responsible for the cataclysmic event that sent half the world into the sky – looking for ever more powerful ore, their cultivation of Deep Metal was responsible for the apocalyptic event. The dwarves, as a whole, do not deny this, with the exodus towards the surface and a pledge to fix the world being crucial components of the dwarven psyche. (Believe me, as a German, I can relate to an instilled experience of guilt for horrible deeds my people have wrought…) Over the years, the dwarven race experienced a schism between those below and on the surface, each deeming the other heretics – and thus we have the explanation for the dwarf/duergar-split in this campaign setting.

Surface dwarves are depicted with full racial stats, though they basically are the core dwarf using the sky sentinel alternate racial trait, including trade-ins. Duergar are also depicted, at +2 Con and Wis, -4 Cha, with slow and steady, superior darkvision, +2 to overcome SR and dispel, +2 to AC and CMB-checks when dealing with aberrations and light sensitivity. – Not complaints re power-level here.

This duality is also represented in the two kingdoms to which we’re introduced, the first of them being the Copper Crown Mountains, the latter being the significantly less pleasant Zamcelty, which is lorded over by the duergar. Both nations feature a sample settlement statblock, just fyi. Interesting, btw.: There are no divine spellcasters in Zamcelty and the region is militarizing further, which is never a good sign in the face of racial intolerance. The pdf also provides two deity-write-ups: Adan would be the quintessential LG dwarf-father and benevolent racial deity. The second would be Lawful Evil and significantly less pleasant – the Ashen King, typically manifesting as either dwarf or kobold or cloud of ash with gleaming eyes – this entity, supposedly a king who dug too deep, is the miner’s boogeyman – who must be appeased when the flames change color and the air turns rank. He is also worshiped by adheres, kobolds and worse, so yeah.

The pdf does contain a hybrid class, namely the forgepriest, who receives d8 HD, proficiency with simple, martial and dwarven weapons and all armors and shields excluding tower shields. He casts spells as a cleric of up to 6th level, with Wisdom as the governing attribute for their prepared spellcasting. They gain 3/4 BAB-progression, good Fort- and Will-saves and second level nets channel energy, which scales up to +7d6 at 20th level. They can spontaneously cast cure or inflict spells, respectively, gain a bonus skill point each level that must be invested in Craft skills…and fails to state how many skills per level it receives.

3rd level nets endurance and 4th level Weapon Focus (warhammer); if the forgepriest already has that one, he gains Weapon Specialization for it, but only once he has reached a BAB of +4. 6th level nets Scribe Scroll, with 7th level providing the warpriest’s sacred armor. Annoying – the spell references are not italicized properly. 8th level nets Craft Magic Arms and Armor as a bonus feat. 10th level negates the fatigued condition for the forge priest and reduced the exhausted condition to fatigued instead.

At 12th level, the character may 1/day attempt a Fort-save to negate damage incurred by an attack – with the DC being based on damage, which makes it a very unlikely endeavor and basically useless. 13th level nets the first of a handful of arcane spells that are added to the forgepriest’s repertoire, with each level thereafter providing another one. One such spell may be cast 2/day and does not eat a spell slot, but must be prepared in advance. The ability does not specify which attribute governs this spell – Int would make sense as the default for prepared arcane casting. The ability also fails to specify whether the forgepriest suffers from arcane spell failure when casting these arcane spells.

Starting at 15th level, these can be activated by anyone – 5 targets are designated by the forgepriest, who may then activate the spell, but at the cost of +2 spell levels…which are pretty much irrelevant, considering that RAW, he can only cast one such spell 2/day. Starting at 16th level, these guys may inscribe runes with this confused mechanic permanently at the cost of their own spell slots, which would be interesting, but the wording-changes from plural to singular, editing glitches and lack of spell italicization render the ability pretty obtuse

14th level nets this gem: “The forgepriest gains a bonus on Appraise and Craft checks related to objects made of stone.” Okay. How much? No, it is not stated. 18th level nets a bonus feat, 20th a 1-minute lasting DR 10/- form that gets class level as BAB and ignores armor and encumbrance restrictions…which feels weird, considering the dwarven slow and steady trick. Oh, and the capstone fails to specify how often it can be used and how it is activated. This hybrid class is flawed. It does not bring anything compelling to the table, sports several unnecessary hiccups in formatting and rules-language and its unique tricks come too late and are unnecessarily hard to grasp.

The pdf does sport 5 feats. Better crafting, social skill-bonuses when interacting with your clan, +4 vs. Disarm, no penalty while squeezing and its + mount follow-up. Apart from the squeezing-options, I’d not consider these worthwhile. A total of 6 traits, properly codified by trait subtype, are presented and they are solid.

Dwarves are master craftsmen, and as such, new item qualities are next – acid-washed items, for example, get better saves versus rust, disintegration and acid, while weapons with blood-groves reduce weight and increase hardness. Folded metal is harder and ornate items grant social skill bonuses. Skills are not properly capitalized. Osmium, as a material, is a variant of adamantine that does not have the hardness-ignoring properties, while Deep metal is basically adamantine that can ignore up to 25 points of hardness instead…oh, and it is treated as cold iron. It is basically the super-metal f the setting and thus expensive as all hell. The priest’s bane special quality, at +1, adds +2 to enhancement bonus and +2d6 damage versus divine spellcasters…which is pretty strong and arguably better than the type-based usual bane. For balance’s sake, it should be +2.

Editing and formatting on a formal and rules-language level leave something to be desired. There are missing letters, improperly formatted spells and rules-components, switches between plural and singular in the same ability. You name it. Layout adheres to the nice two-column full-color standard of the series and the pdf sports nice full-color artworks. The cartography is nice.

This installment of the series does show that it had three authors: Robert Gresham, Ewan Cummings and Angel “ARMR” Miranda; some aspects of the pdf are concisely presented and generally are solid: The brief glimpses of the kingdoms, history and culture make sense and feel interesting. I wished, frankly, they were longer. The forgepriest, no way around it, is lacking and the feats left me unimpressed. The materials and crafting modifications, however, were pretty nice. The pdf is inexpensive for its page-count and there is some value to be found here. Hence, my final verdict will clock in at 2.5 stars, rounded up to 3 due to in dubio pro reo.