Cults of Celmae: The Ashen King

Cults of Celmae: The Ashen King 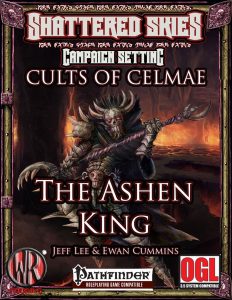 The first pdf depicting the diverse cults of the Celmae-setting (also known as Shattered Skies), clocks in at 16 pages, 1 page front cover, 1 page editorial, 2 pages of SRD, 1 page back cover, leaving us with 11 pages of content, so let’s take a look!

The believers of the Ashen King’s creed hold the conviction that the cataclysm that shattered the lands of Celmae, the central, original catastrophe of the setting, was but a means of staving off a yet worse apocalypse. Worshiped, unsurprisingly, by the duergar and similar underworld-dwelling creatures, the creed of the Ashen King, fully reproduced here, begins with the words: “We follow the shadowed path of He who destroyed the world and saved it.” – yes, this is indeed an interesting duality.

The aforementioned beings receive further coverage and, if you will, contextualized origin-myths: Adherers, for example, once were leper-bandits, transformed by their worship of this deity. Similarly, the kobolds also receive a brief history of their interaction with the deity…and we hear of the hell-candle of Brynndell, where strange dust rendered miners sick, hellish lights began dancing in tunnels and ore containing the undead make for a nice set-up for a high-concept mine-crawl. Finally, orcs whose skin has sloughed off, with sinew and muscles turning gray, represent a nice take on the classic creature with a distinctly Ashen King-like flair.

The Ashen King is depicted as a Lawful Evil deity with 4 domains and subdomains and two favored weapons: Pick and scythe. As always with Celmae-deities with multiple favored weapons, that leaves me to question how this interacts with class features and proficiencies pertaining the favored weapons of the deity. A deity of fire and ash as well as of rigid principle, the write-up manages to evoke a resonance with the Dark Souls-series in themes, which is a nice touch as far as I’m concerned.

The pdf provides 3 fully statted servants of the Ashen King – a deep dwarven (duergar) warpriest at CR 11, a rogue (charlatan) at CR 11 and an adherer dread mummy cleric at CR 9. I’d be significantly more well-disposed to using these fellows if their statblocks were properly formatted: There is not a single italicization in sight, which renders running the statblocks more tiresome than it should be. Also annoying: One ability of the mummy uses the second person instead of the third, making it quite obvious that the ability was just ccp’d. On a more positive side-note, 3 complex and relatively detailed adventure-hooks are included.

The pdf also features a selection of spells, namely 3: Ashen King’s Gloom is cloud that imposes fear-based effects on those inside and may even panic those trying to dispel/disperse it from the inside. Lava Ball is just a renamed Giant Lava Ball from Rite Publishing’s 1001 Spells. Similarly, Sphere of Disintegration is just a transparently renamed Disintegration Sphere from that book. You know, I don’t mind this type of borrowing, particularly of good pieces of content, but the renaming without any flavor additions is odd and does look a bit to me like to me like obfuscation, since the spell-names are not closed IP. Generally, I consider it a sign of courtesy to denote when one is borrowing another person’s design, beyond the confines and demands of the Paizo-standard books/OGL. I won’t penalize this book for it, but it also shows as an inconsistency in the spell presentation, with the first spell’s formatting being incorrect in several cosmetic details.

The pdf introduces the gloom helm, which can duplicate aforementioned spell, enhances Intimidate versus said targets…and gets a per se cool trick that allows for a premature end of the cloud, as it draws towards victims, heating their equipment. All things that should be italicized….are not. Also: +4 to Intimidate versus targets affected by the spell plus a 1/day spell-in-a-can with a unique modification feel a bit underwhelming for the massive price of this helm: 28 K.

We get a specialized summon monster-list for the servants of the Ashen King and also, and that is quite nice, an Inner Sea Gods-style write-up of the deity, with full-blown obedience, evangelist, sentinel and exalted boons. These are, for the most part, nice, though adding disintegrate to an attack should probably be SU, not SP. The option to truly dissolve corpses in sticky soot, preventing the return to life is nice, though, once again, the formatting of abilities is slightly inconsistent here.

Editing and formatting are better than in previous offerings by Wayward Rogues Publishing, but formatting in particular is still off in several immediately obvious ways that could and should have been caught. Layout adheres to a 2-column full-color standard and the pdf comes with a solid blend of original and stock artwork. The pdf has no bookmarks, which constitutes a serious comfort detriment.

Jeff Lee, Robert Gresham and Ewan Cummins deliver a nice deity write-up here; the ashen king tapping into visuals that have been popularized by the souls-franchise certainly generated some interest on my end. That being said, if you’re expecting notes on a cult or religion’s structure, fame or prestige benefits herein, you won’t find them – so if you’re accustomed to e.g. Fat Goblin Games’ “Final Phase“, you’ll consider this to be a bit barebones. I do know now about several of the servants of the Ashen King, but not much about an agenda, modes of operation or the like.

The flavor that is here is nice, though: In particular how adherers have been fitted with a cool origin story makes me consider them more than just a lame twist on mummies, so big kudos for this one. There is quite a bit to like in this pdf, but at the same time, the flawed formatting of the pdf, its inconsistencies that become even more obvious when comparing material that has been ccp’d and renamed from other sources…that aspect is really, really rubbing me the wrong way and further decreases the oomph the pdf offers.

Don’t get me wrong, the fluff herein is pretty nice and has some cool ideas, but mechanics-wise, I found myself less than impressed by this. If you’re just looking for mechanics, consider this a 2-star-file. However, if you do not mind the reprints and are in it primarily for flavor and ideas, then this may be something worth checking out and closer to 3 stars. Since I make it a habit of trying to see the positive in a given book and since this is primarily intended as a flavor-book on a cult, I will rate it as such…though honestly, as much as I like the ideas here, I still feel that the whole religion and its structure are pretty opaque to me. Hence, my final verdict will clock in at 2.5 stars, rounded up due to in dubio pro reo, with the aforementioned caveats.