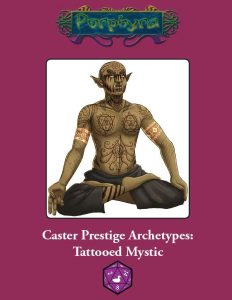 This installment of the Caster Prestige Archetype-series clocks in at 8 pages, 1 page front cover, 1.75 pages of SRD, leaving us with about 5.25 pages of content, so let’s take a look!

The prestige archetype this time around uses the wizard as a basis and thus, the prestige archetype receives d6 HD, 2 + Int skills per level,  proficiency with simple weapons, full spellcasting progression of prepared spellcasting governed by Int and a 1/2 BAB-progression alongside good Will-save progression. However, unlike a regular wizard, the tattooed mystic puts his spells not in a spellbook, but within the drawings on his skin, necessitating a Spellcraft check to identify the like – and yes, rules for removing them are provided. The familiar can similarly become a tattoo to be carried by the mystic. 4th level yields Inscribe Mystic Tattoo (erroneously, but harmlessly incorrectly formatted as (Feat) and 8th level lets the mystic use his own ability score modifier etc. to set the DC of spell tattoos. 12th level halves the time for Craft (tattoos). 16th level increases the CL for spell tattoos by +1 and as a capstone, he may expend a spell slot or prepared spell of the same level or lower to prevent a used spell tattoo from being expended.

Now, the angle where player agenda comes into the fray would be the mystic tattoos, the first of which is gained at 2nd level, with additional ones gained every 4 levels thereafter – these pretty much represent what we know from the prestige class. I kinda wished that the prestige archetype provided more choice to represent the variety that a  full class should offer.

The prestige archetype comes with notes for the use of the arcanist, druid, psychic, sacerdote, sorceror, witch classes. Beyond specific favored class bonuses for the core races, catfolk, dhampir, dragonblooded, erkunae, polkan and tieflings are covered regarding class-specific FCOs.

Editing and formatting are very good, I noticed no glaring glitches. Layout adheres to a 2-column full-color standard with PDG’s signature purple highlights and is pretty printer-friendly. Huge kudos: The pdf comes, in spite of its brevity, with full, nested bookmarks, making navigation extremely user-friendly!

Carl Cramér’s tattooed mystic is a solid prestige archetype – it translates the prestige class well to the context of a full class, is precise and delivers exactly what it says on the tin. I wished it expanded the tattoo choices with new option, but you can’t have everything, I guess. In the end, we get a well-made prestige archetype here – well worth a final verdict of 4 stars.