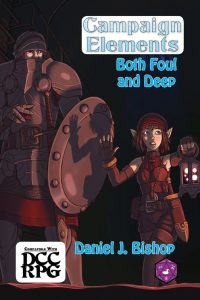 This DCC-toolkit clocks in at 53 pages, 1 page front cover, 2 pages SRD, leaving us with a massive 50 pages of content, though these are formatted for 6’’ by 9’’ digest size (A5), which means you can fit multiple pages on one sheet of paper.

So, first things first, in case you’re new to the series: The Campaign Elements-series is basically a collection of set-pieces supplemented with rules, intended to be dropped as is into an ongoing campaign…or to be used as a scavenging ground. As such, this sits squarely on the line between modules and setting supplements – while it can be used as written, it is just as useful as a file to supplement other modules; take e.g. “The Jeweler that dealt in Stardust” – the module assumes that the smartest way for the PCs to enter the locale would be via the sewers, but there isn’t much going on there. This is where an enterprising judge can employ this supplement, as we get a ton of material for sewers.

Wait. I know. Sewer levels/environments have a bad reputation. I can name, at the top of my head, a ton of modules that take place in sewers. Among these, 10%, at most, are worthwhile. But what if you want/need to run such a module? Well, this pdf pretty much helps dealing with that issue. We begin with a summary of different hooks to get the PCs down into the sewers. From there, we move on to general terrain features, the first thing a lot of modules in sewers fail to properly take into account. So yes, falling into sewage is a BAD idea – 6 different diseases can be found herein, ranging from mites and parasitic worms and scarlet rash. The second component many sewer-scenarios get wrong is that they depict, ironically, I might add, sewers as a mechanically sterile environment – this pdf does help here quite a bit: We get a d30 random encounter table, which brings me to one of the main components of this pdf.

You see, we not only get the usual people of the sewers (including secret taverns, cultists, etc.), but also a bunch of components we usually don’t see: Filthlarks, for example, the scavengers of the filthy places, gentlemen clubbers going to a clandestine meeting…and there are resurrection men; basically grave robbers in the name of science. Beyond those, we also get what amounts to a pretty massive bestiary section: We get albino alligators, aliens rats from another world, blood slugs, centipedes that seek to burrow into your flesh, carrion moths that spread hallucinogenic powder via their wings…even cooler: What about the cessceada? These swarming insects can cause the skin of those infected to slough off. There are beetles that can be sold to the dyer’s guild for profit, particularly agile drain runner foes, disgusting oozes, filth elementals… Have I mentioned the globlins that split by fission? Hellspore fungi and lamprey swarms are cool, and in the dark recesses, there also is the terrifying loathly one; there are phantom gentlemen…and more. This bestiary section is really cool, with each of the entries breathing some form of truly intriguing and captivating idea, in spite of the sometimes down to earth theme.

The pdf also provides the patron Squallas, mistress of the night soil rivers, but we only get the invoke patron table here – no custom spells, patron taint or spellburn, but all right. This would btw. be as well a place as any, there are quite a few really nice full-color illustrations throughout the pdf – particularly the sewer troll image is nice.

At this point, it should be noted that judges with an extensive library of books may find some nice easter eggs here and there – in the case of the troll, for example, a nod to the upcoming, Angels, Daemons and Beings Between II by Shinobi 27 Press. These nods are unobtrusive enough to not impede your enjoyment of the content, but certainly should be fun for quite a few judges…and they provide obscure and potentially easily ignored links you can further develop…but I digress.

Now, so far, I have mainly commented on the toolbox-y aspects of this pdf, but it is also an adventure locale. We get a solid b/w-map of the sewer-area depicted AND a player-friendly iteration, which is a huge plus, as far as I’m concerned. Now, the keyed encounter areas provided for the judge come with well-written read-aloud text (we have come to expect nothing less from Daniel J. Bishop!), but also feature unique hazards and creatures beyond the ones already mentioned – some are obviously intended as plot-threads for the judge to further develop, while others are just amazing; the image of a massive spider that carries its brood on its back is great, and just let it be known that just because corpses move doesn’t mean that they’re necessarily undead…which can result in a rather cool scene. Oh, and the line from the core book? Yes, there is a means to learn a spell from the mouth of a dead man…and how that phrase is twisted is really cool. I could explain all of the 9 keyed encounters here, but I’d frankly do the book a disservice.

You see, the series has traditionally a “squeezing it dry”-section, wherein you can find further suggestions to get the maximum amount of mileage out of the book – considering how strongly the toolbox/bestiary aspect is emphasized here, I can most definitely see judges employ this pdf’s contents far beyond the exploration of the sewers presented here.

Editing and formatting re very good, I noticed no serious glitches. Layout adheres to a 1-column b/w-standard that is pretty printer-friendly. The full-color artworks are captivating, cool and deserve a big shout-out. The cartography featuring a player-friendly map is really cool. The pdf comes fully bookmarked with detailed, nested bookmarks, making navigation comfortable.

Daniel J. Bishop’s name on a book is, for the most part, a great indicator that it will rock – in fact, even if you do not play DCC, both new school and old school games can get something out of his offerings. There is a crisp quality to his prose, an overarching vision that not only gets the peculiarities of DCC, but, more importantly, really understands the tone and what makes it stand out. There is always an aspect of the weird here, one that feels like it was drawn straight from the greats. In fact, much like Leiber or Howard, he is adept at using precious few words to inspire; his fantasy, infused with a little dose of gonzo and the soul of sword & sorcery, has a distinct tone that is both grounded and wondrous, that retains this strange, captivating sense of plausibility. This booklet brings this aesthetic to sewers, perhaps the most maligned of adventuring locales, and elevates them. In short, this little booklet is one of the very few supplements/modules dealing with sewers that I’d consider superb – the monsters are so cool and interesting that quite a few may well warrant conversion. DCC judges, the primary audience of this book, should consider this a must-purchase anyway. My final verdict will clock in at 5 stars + seal of approval.

You can currently only get this amazing book here on GoFundMe!