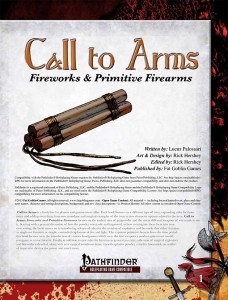 As always with the series, we begin with a contextualization of the respective type of weaponry, both in the context of our real world and the fantastic worlds our RPGs work in – and it is interesting and certainly worth a read, as it not only highlights the differences between firework-weaponry and firearms in game, but also elaborates on little known weapon categories like the handgonne and yes, the pdf acknowledges the potential for the rarity implied by Ultimate Combat regarding , including some solid scaling advice. It should be noted that nitroglycerine and similar high explosives are not part of the material covered herein – the focus lies on more primitive explosives.

Now where the pdf becomes very interesting and tackles a hole in the rules that has probably come up in EVERY SINGLE GAME featuring chemical-based explosives or even just alchemist’s fire is in the presentation of concise rules for fuses and their adjustment. Kudos! Similarly important would be the rules-backed classification of varying degrees of blackpowder quality, providing simple and superior black powder rules to supplement the “common” basic premise of blackpowder in the game, while adding a new dimension that manages to represent the variety of blackpowders in real life in game.

The pdf does sport a diverse collection of basically traits/mechanical effects that can be applied to a given firework, increasing the effects as well as costs and Craft DC, though some do require superior blackowder. The rules provided for this DIY-damaging firework-crafting are absolutely neat and make the weapon category significantly more versatile – whether caustic spray or deafening boom and yes, there are larger and smaller modifications as well. Similarly, rules-wise, we cover dust explosions as well as firecrackers, bombs, exploding powder flasks and kegs and concise rules for mines and makeshift explosives and yes, before you ask, rules for detonating multiple explosives are indeed provided herein. Carrier rockets that can deliver objects into the sky, exploding arrows (and bolts) and thermite…and yes, the pdf also collates e.g. fireworks like the banshee ballerina for completion’s sake.

The pdf also provides optional rules for “realistic” explosive powder-based firearms that can be modified further – which, again, is neat to see. The pdf also sports a diverse selection of special weapon qualities for firework-firearms. Rules-wise, the pdf continues to follow the array of customization option championed before with easy rules for making firearm/melee-combined weapons as well as volley guns, which can be summed up as pepperboxes that fire their whole load at once, but at the cost of massive recoil penalties. I am not a fan of these, since, as far as I understood it, they essentially provide means for additional attacks at the cost of gold and accuracy, increasing the one-shot-kill-factor and practically begging to be abused.

Similarly, fire darts and arrows etc. and pyrotechnic bullet launchers can be found herein as well. Now I already mentioned handgonnes and in this catch-all term, both optional reloading rules, fuses, hand ignition, serpentine and matchlock allow for the precise customization of the respective way in which you want to introduce the weapon type into your game, while, again, combined firearm rules are provided. Increasing or decreasing caliber and hooked handgonnes that can be braced more easily are part of the deal. Hand mortars and culvertins as well as wall guns and bullet-shooting crossbows extend the material further and should fit the respective desires of most PCs.

Similarly, costs for a wide array of ammunition are provided – from stone to clay pellets to e.g. sulfur-free explosive powder, the massive array of options upon options grows to a barrage that also, interestingly, extends to the defensive. The rules provided for breastplates generated to protect against the more powerful firearms as well as mantlets, little portable shieldwalls and pavises – which inspired me to finally make a variant of Demon Soul’s Phalanx-boss. In an overlap with the last two impressive installments of Call to Arms, amadou, driptorches, etc. are also contained herein, following the formula of aspiring to provide a holistic, definite resource on the subject matter – similarly, the basics of lighting a fire (see Call to Arms: Torch & Flame for more detailed information) has been partially reprinted here as well in sufficient detail.

Obviously, the book also features a selection of different magic items – here, the level of detail extended to the non-magical further extends to the magical realm – vast, magic-powered flash-bang enchantments and similar exclusive special weapon abilities to be added to explosive weaponry. To give you an example I really enjoyed here – what about a whistler that generates a 10-ft silence effect around it? Or a whistler that records sound around it, repeating it upon retrieval upon burning the second fuse? Yes, these weapons actually make magical warfare make sense and add new dimensions to the respective options at the behest of both players and nations, featuring some unique special OPs gambits and tricks. Or what about the illusion-creating ignis fatuu? Elemental explosives? For the sake of completion, e.g. everburning slow matches are reprinted in here as well, though personally, my favorite has got to be the diverse and varied types of magical explosive powder, which may e.g. sicken frightened or panicked creatures, affect the incorporeal or create an icicle at the end of the barrel, which can then be pulverized into cold shrapnel by scatter weapons. On the cursed side of things, bad powder, infused with chaotic energies, can result in unpleasant surprises, while the intelligent Huolongjing, a magical book, would make for a great hook to introduce firework weapons to an area where they were previously unknown.

Fans of mythic rules can find a fire gourd that can result in panics and be reformed by expenditure of mythic power, while the Devil’s Brand powder keg is a ridiculously powerful keg of superior black powder with unique properties depending on its use.

The pdf also provides new character options, with the pyrotechnician alchemist being interesting: The archetype is proficient in firework-related weaponry and may add the effects of his alchemist bombs to them – which is rather potent. Instead of Brew Potion, they get Craft Magic Arms and Armor and 2nd, 5th, 8th and 10th level provide an additional bomb discovery instead of the usual poison resistance/immunity. To offset the relative power-gain, the archetype receives a stunted mutagen progression at level – 3 efficiency. The archetype is generally well-presented, though a bit on the strong side of things: Particularly the additive bomb class feature needs to be carefully watched and imho overshoots the target a bit. The second archetype would be the coulevrinier, which represents a well-balanced, solid firearm-specialist fighter. For completion’s sake, the rules appendix also features options for bracing firearms (you may know these from previous CtA-releases), a Craft-alchemy addendum for explosives and fireworks, optional means of acquiring fast firearm proficiency (with downtime-rules-synergy), fouling them, planting explosive charges and, again, the rules for smoke and sound hazards we already saw in CtA: Pistols and Muskets.

Editing and formatting are very good, I noticed no glaring issues. Layout adheres to Fat Goblin Games’ two-column full-color standard with sparse, but nice pieces of art here and there. The pdf comes fully bookmarked for your convenience.

Lucus Palosaari’s Call to Arms on firework weapons and explosives has easily been my most anticipated so far – and usually, when I go into a book with expectations to be wowed or amazed, I end up being disappointed. Not so here. Beyond offering plenty of unique new weapons, powder-rules and the like, it is the attention to detail, the vast research and imaginative potential, and, more than that, the devotion to maximum customization that makes this work: When a given component of rule does not work within the context of your individual game, well, no problem – it can be ignored. If it does – all the better! That being said, the amount of rules that are potentially problematic, is negligible in relation to the whole book.

Much like the previous installments, this takes a rather simulationalist approach to the subject matter, allowing you to truly create unique and complex fireworks and scenarios, but refrains from bogging you down with too many interwoven, small rules – they’re here.

They can work with one another and in some instances, they are used in conjunction, but for the most part, we have pure modularity here. Personally, I can already see my players abusing the heck out of volley guns, for example. Though that and the similarly open and problematic alchemist archetype constitute in total about 1 page of 60, though – sure, this pdf may not be perfect – but for the most part, it is simply inspired. The mundane and magical powders are BRILLIANT and, more importantly, this pdf manages to actually make firework/explosive specialists valid builds in PFRPG and adds to the lore of warfare in a magical context. This is the most refined of the “old” Call to Arms books I’ve covered so far and certainly shows the steady progression of the author. While not perfect, I truly enjoyed this book and the massive attention to detail and love that obviously went into it. And I’ll take some tiny flecks of flaws in an inspired book of bland, but uninspired perfection any day. Hence, my final verdict will clock in at 4.5 stars, rounded up to 5 for the purpose of this platform…and I will add my seal of approval to this.

You can get this surprisingly awesome book here on OBS and here on d20pfsrd.com’s shop!