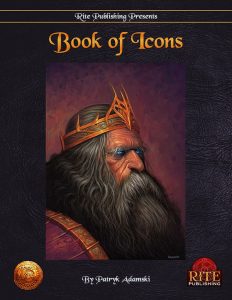 This massive pdf clocks in at 46 pages, 1 page front cover, 1 page editorial, 1 page SRD, 1 page back cover, leaving us with an impressive 42 pages of content, so let’s take a look!

All right, at this point it’s not a big secret that I’m not the biggest fan of 13th Age’s vanilla icons – while recent installments of 13th Age Monthly and similar supplements have added dimensions to some of them, I still consider them to be a bit too archetypical. Similarly, the rather freeform approach to icons can be challenging for a GM, which is why this pdf provides pretty much a rather simple, yet more streamlined and concise nomenclature regarding icons and the interaction with them.

A proxy, for example, would be an NPC that serves as a reliable intermediary/liaison between PCs and icon, meaning that your low level PCs don’t always get to hassle their icon, diminishing the effectiveness of actually interacting with them. An investment is a gift, an object or piece of information that provides a permanent advantage in the grand scheme of things, while an event would be a single occurrence that fits the theme of the respective icon. Similarly, the pdf provides the term of “thematic adjustment”, which means that the GM reskins a given area to fit more closely with the themes of the respective icons.

As a nice nod to one of the cooler aspects of Rite Publishing’s conversion of the superb Breaking of Forstor Nagar-module, the pdf also provides dead simple, elegant basic rules for hazardous terrain/attacks by the terrain. Two thumbs up!

Now before I get into the nit and grit of the respective icons featured within these pages, I’d be grossly negligent to mention an aspect that may well enhance your 13th Age GMing prowess, particularly if you are a relatively new GM – the rather handy step-by-step break-down and explanation of Relationship Dice and how to handle icons in the game. This section is VERY detailed and, particularly for GMs that aren’t as good at improvising, pure gold – with advice on staging events, balance-considerations regarding aforementioned investments and thematic adjustments, it is a handy section to have, though one more experienced GMs won’t require.

Now I mentioned new icons, so what’s their schtick? Well, basically, the 6 new icons herein are based on 6 cards of Tarot’s major arcana, with the first, the Fool being reimagined as the adventurer. (And yes, dear fans of the Persona-franchise, I’m thinking the same thing here and really want to expand that aspect…) The general presentation of the respective icons in this supplement sport information regarding heroic, ambiguous and villainous adventurers and d8 themes that can be mixed with the following to provide contexts relevant for the icon. Each of the icons sports a d6-table for proxies, events and investments that can be blended with the aforementioned leitmotif. Each of these d6-tables sports negative spins for the respective entries.

Based on the reversed fool, the revolutionary would be the next icon – where the adventurer is happy-go-lucky and all about the challenges in a given moment, the revolutionary is methodical and exists to take a stand – particularly in the regular 13th Age context with its plethora of established icons, this guys makes for an interesting addition as a more methodical wildcard. The order, in contrast, based on the Emperor-card, is, as the card shows, perhaps the most redundant of these – while one can envision it as a cabal that enforces the status quo, the obvious thematic overlap with the emperor icon and similar icons is apparent, though conflict between the two may make for an interesting narrative.

A similar duality can be seen with the Cult of One, based on the reversed emperor – this one is basically rooted in the belief of individual exceptionalism and can be used to spin it in a priestess-like believe in a messianic figure or twisted towards an ideology seeking to create a new species under an enlightened leadership…and history has certainly provided ample of examples how horribly wrong this type of ideology can turn out. The Monster, based on the devil arcana, would be an icon that is useful for the opposition: Brute, vile, tainting evil, this icon would be the mirthless, raving sledgehammer as opposed to the diabolist’s razor or the crusader’s pragmatic discipline – the icon of vile perversion, mutation and unwholesome change.

The more elegant and less overt evil icon herein, the tempter, also based on the devil arcana, could be bast summed up as the more subtle part of that, providing some overlap with the diabolist – basically, you can envision the methodology here as the devilish equivalent to the monster’s demonic brute force, more Faustian than brute force.

This pdf does not stop with these icons, though: The book also sports some handy tools to add depth to the game, beginning with 10 abbreviated NPC-write-ups, several of which sport unique abilities alongside general guidelines and backgrounds as well as trappings. Beyond these, the book also sports no less than 7 sample organizations, ranging from the Fireworks, Demolishing and Quarry Blasting Company to the order of knight-hospitalers and adventurer guilds, the respective entries sport information on goals, structure, status and key areas of influence – but, as often, all may not be as it seems, which means that the GM is also presented with 6 secret agendas that include a claim for domination, being fronts for invaders from beyond and similar unpleasant, if classic twists.

Editing and formatting are top-notch, I noticed no significant glitches. Layout adheres to Rite Publishing’s two-column full-color standard with nice, full-color artworks…though fans of Rite Publishing may have seen a couple of them before. The pdf comes fully bookmarked with nested bookmarks for your convenience.

Patryk Adamski’s Book of Icons is a good read and particularly useful for less experienced GMs – anyone who has had issues with the presentation of icons in 13th Age and handling them in-game can consider this to be a useful, nice sourcebook – which is also pretty much the theme for this book: The general presentation of the new icons, NPCs etc. is overall solid, easy to grasp and well presented, providing some additional structure to the icon-rules, while retaining the flexibility championed by 13th Age. Novice GMs and those who had/expect to have issues with icons and relationship dice should consider this well worth the investment.

At the same time, while certainly not a bad book, personally, I didn’t take much out of this book – as a longtime veteran GM and someone who can improvise PFRPG-statblocks and whole adventures, I had no issues adjusting to the icon-mechanics of 13th Age. The new icons presented herein, by necessity of them being setting-agnostic, felt a bit opaque to me and while I like the Tarot-idea, the restriction to only 3 cards means that the new icons on their own can’t really replace a pantheon of existing icons – and, more jarringly to me, they offer quite a bit of serious thematic overlap with 13th Age’s default icons – unnecessarily so, at least in my opinion. By emphasizing other aspects of e.g. the tempter or the order, they could have been made more distinct…but perhaps that’s just me being spoiled and expecting something akin to what Icons of Parsantium or the Midgard icons delivered regarding facets and depth.

Please take my criticism of this book with a grain of salt, for, as mentioned above, I may simply not be the target audience – for less experienced GMs and those struggling with integrating icons, this pdf may well be a godsend, though veteran GMs get decidedly less out of this book. My final verdict will hence clock in at 4.5 stars, rounded down to 4 for the purpose of this platform – a good offering, though one that could have done a bit more to also provide material for the veterans.

You can get this handy book here on OBS!