One Bling to Rule Them All: Glyphed Weapon Wrappings

One Bling to Rule Them All: Glyphed Weapon Wrappings 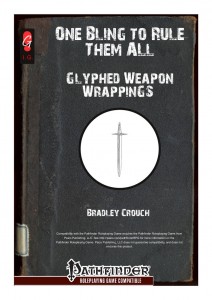 This pdf clocks in at 4 pages, 1 page front cover, 1 page SRD, leaving us with 2 pages of content, so let’s take a look!

We all know the Christmas-tree syndrome – high-level characters come decked out in magical gear, but at higher levels, this syndrome becomes problematic – essentially, most groups utilizing vanilla rules tend to sooner or later carry around an arsenal of different weapons for different foes: Immune versus fire? Just change the weapon. I’m not a fan of this and never was – my insistence on magic quirks (see 13th Age) and scaling magic items in my non-playtest main campaign represent this predilections.

But what can this pdf contribute to the matter at hand? Well, the basic concept is simple – instead of applying a magic enchantment to a given weapon, you instead create wraps of clothing with glyphs, which contain the respective weapon special abilities – need electricity? Wrap the shock ability around your weapon. Using a glyph-wrap is a full-round action that provokes AoOs. After 1 hour, the glyph wrap, if the sum of the base price modifiers of all the weapon’s native enchantments and abilities is greater than or equal that of the total encoded in the glyph wrappings, the wrap then suppresses the item’s special qualities and substitutes its own encoded enchantment.

This means that glyph wrappings still require the respective item to actually be magic, thus not undermining the carefully crafted hierarchy of items and WBL. However, glyph wrappings are still valid options – at only 1/5 the base price, they mean that you do not have to create the same weapon over and over with various enchantments. A handy table lists sample costs for you. Construction requirements are based on the respective special qualities, meaning that this contains the option to use it with just about every type of enchantment. The pdf goes on to provide a sample glyph wrapping and 2 feats – one to remove glyph wrappings as only a move action and one for more rapid expression of glyph wrapping special abilities.

Editing and formatting are top notch, I noticed no glitches. Layout adheres to Interjection Games’ two-column b/w-standard and the pdf comes with nice stock art. The pdf has no bookmarks, but needs none at this length.

Bradley Crouch’s “One Bling to Rule Them All” is perhaps one of the most under-appreciated series currently out there for PFRPG – the first two installments were pretty much genius and this pdf also is…kind of. The glyph wrapping’s flexibility is well-priced and the introduction of the wrappings means that it makes new narratives possible – smuggle wrappings into the magical prison – now you just need to get the blade of the guard captain… I enjoy this. I also absolutely love the fact that this does decrease the requirement to carry x weapons around with you, which always struck me as ridiculous. So far for the positive – but there are some minor nitpicks I can field: It is clear from the sample that the wrappings have negligible weight, but explicitly stating this would have been nice. Beyond that, I see a certain issue – can the steal combat maneuver be used to steal a glyph wrapping? Can a glyph wrapping be sundered, while the weapon remains intact? Sure, you can apply common sense and handwave/house-rule these cases and they do not impede the per se cool idea in a particularly explicit way – but they remain issues that cost this otherwise cool pdf the full five stars. Instead, I will settle of a verdict of 4 stars.

You can get this nice system for just one buck here on OBS and here on d20pfsrd.com’s shop!