Beasts of Legend: Beasts of the East

Beasts of Legend: Beasts of the East 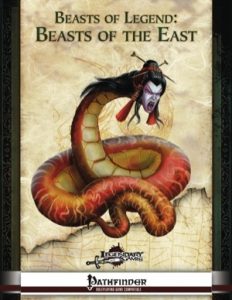 So, what do we get herein? The oomphteenth version of the Yuki-no-onna? Nope, this is a bestiary of Legendary Games, after all. In an interesting take on the concept of monsters, this supplement begins by talking a bit about the real-world inspirations of some of these creatures…and guess what? They are more often than not new to me.

Take the naga on the cover – inspired by snakes in the Mekong river, these CR 5 nagas get fire resistance, fast swimming and an array of spells – which, strangely, feature several “3/4″s before spell names in an uncommon formatting glitch that extends to other creatures. The naga’s poison causes fire damage, which is an interesting twist, but overall, I wasn’t too blown away by this one. Next up is the CR 8 Neak Ta Kami – an innocuous piece of wood with a painted face on some bricks with twigs. Cute, small…and will mess you up if you: With superb telekinetic abilities and a devastating 3/day cyclone while within reach of its ward, these kami are benevolent and sweet…but if you try to destroy them…well. Don’t.

The Kmoch Pray (CR 11) is creepy. Really creepy. Think of a tree covered in caustic, yellow sap that can fling it in globs…oh, and it has deadly, scythe-like claws…as well as a weakness to positive energy. Absolutely unique, creative and awesome – glorious critter! Speaking of “never saw that one before” – the Kting Voar (CR 4), a bovine beast whose horns erupt from bones is a great example of good animal design: Powerful and all about sensible abilities, using reinforced horns, tough skin and trampling to defeat its foes.

This one, I’ve seen before, though: The Bakeneko Oni (CR 3) is pretty much a staple of Japanese mythology and one that ultimately has me surprised it has not been done by Paizo at this point. Anyways, think of them as maleficent halfling-sized cats that can stand upright with a scoiopathic rictus-grin. With some nasty, stealth-enhancing SPs as well as the option to denote creatures as marked by their envy, they are a nice take on the evil trickster. At CR 6, the Yeren Oni would be the embodiment of the excessive need to withdraw from society to live in the woods…and while that’s a black metal cliché, it’s one I can empathize with. Basically, think of these fellows as a cross between the sasquatch and an oni, with appropriate nature-themed SPs and the option to create scrawlings that confuse the happless traveler AND then erases their memory. This one ability makes this creature stand out for me – you can make a really nasty investigation out of this premise.

Okay, so what about a turtle with a crystalline shell that has a powerful weapon embedded in its back? (Sword in the stone? Who needs a sword in the stone when you can have a sword from a turtle!) These creatures are the Quyrua (CR 6) and they are the caretakers of the magical weapons embedded in them – they are sentient and honorable stewards and may allow creatures to draw their weapon – but are slain in the process. Very cool idea here!

The final creature in this book would be the Sirin-Po (CR 7) – ghoul aristocrats that rose from the dead as a result of being slain in what they perceive as a “dishonorable death”, these gangly-limbed monsters now prey on fear, causing panic with attacks from their grotesquely elongated limbs and gaining bonuses versus creatures suffering from fear-based conditions.

Editing and formatting are very good, though not as exceedingly tight as usual for Legendary Games. Layout adheres to a two-column full-color standard and the pdf’s artists William Hendershot, Michael Jaecks, Jason Juta, Stephen Najarian and Rian Trost deserve a special shout-out: Each of these creatures gets a great one page artwork in gorgeous full color. And boy, these artworks make for great hand-outs. This pdf may be worth it for the artworks alone. The pdf comes fully bookmarked for your convenience.

Additionally, it should be noted that we get an additional pdf containing paper pawns for the creatures herein – kudos for going the extra mile here. Thuston Hillman’s beasts from the east constitute a cool little bestiary: When he gets creatures right, they are absolutely awesome; in particular the more unique ones make sense and a sufficient elaboration on their respective modus operandi provides ideas for enterprising GMs to use them. At the same time, though, I do feel that this pdf does not reach the lofty heights of some other bestiaries from Legendary Games – the naga, bakeneko and the sirin-po feel like they fall a bit short of being as unique as their concepts warrant. Make no mistake, though – at the low price-point, this book is most certainly a steal and a great addition to your bestiary-arsenal. My final verdict will clock in at 4.5 stars, rounded up due to in dubio pro reo…and the fact that this provides some cool critters I haven’t seen before.

You can get this bestiary here on OBS and here on d20pfsrd.com’s shop!