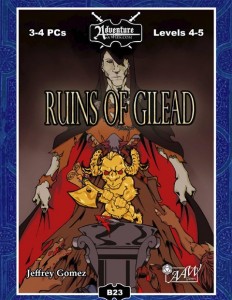 This being an adventure-review, the following does contain SPOILERS. Potential players will want to jump to the conclusion.

All right, still here? Great! There is nothing good on jungle islands. EVER. Alas, this crucial piece of wisdom was not imparted upon the hapless treasure hunting team sent by the Northern Pass Trading Company under the command of Henry Beckett and the experienced hunter Bethany Tirsbury. Rule #2 when finding a ruined city and unearthing a gilded idol: Destroy it ASAP, with extreme prejudice, but only after determining that destroying it does not set the unavoidable, evil entity trapped inside free. If it would pursue other methods. The expedition has not heard about this one either, unearthing the idol containing the demon Aravax, who happily subsequently drove the expedition into cheerful slaughter and hatred. All of this is history – and now, the PCs have been sent to the island to succeed where the first expedition failed and preferably, return with valuable artifacts that do not kill everyone.

So, whether you elect to include a proper mission briefing or not, this module’s meat begins upon the PCs finding the first corpse…and then more. A trail of grisly breadcrumbs leads them right towards the former camp of the expedition (fully mapped, btw.), where they happen upon the grisly remains of a massacre and, once dramaturgy dictates it’s time to enhance the mood of dilapidation further, a GM can spring Bethany upon the players – the clearly disheveled and insane woman makes for a complex social scene with plentiful read-aloud-text for GMs less adept at improvising text. Oddly, the madwoman demands at the threat of violence that the PCs read the journal of Henry (depicted as a kind of hand-out in its own font, should you elect to simply print out and cut out that section of the page) – Bethany is obviously illiterate and while the barbarian-class to which she belongs no longer prescribes this drawback, I consider it sensible as an assumption for any quasi-medieval setting -at least in my home-game, peasants do not read.

Actually reading the text sets Bethany on a deadly course that may be exploited by the PCs – driven into a paranoid obsession, she seeks to find and kill Henry, drive Aravax from the idol and kill it and then claim her prize – obviously, PCs should realize that she is just another unwitting pawn of this corruptive influence – but still, when played right, they may use the confused woman… After this odd visitor and plundering the camp (potentially finding a weird item), the PCs will probably be on their way towards the eponymous ruins of Gilead. Haunted by swarms of deadly hornets and hostile guardian spirits, the PCs make their way to the obelisk at the center of the city – where an intriguing puzzle-combat begins: Essentially, activating the magical mechanism isn’t easy and more and more guardian spirits arrive, though their relatively straight-forward and dumb programming means that they can be outfoxed by smart PCs, thus allowing them to have brains trump brawns in an encounter that plays in a surprisingly fun manner. However, this is only the beginning – with the map thus in hand, the PCs are off to the mapped and remote temple that contains Aravax’ idol – which btw. includes a nasty trap that may drown you in wall of force-like blood. Beyond this ominous threshold, the vile idol and Henry await – the chosen of the demonic spirit sporting unique, strange abilities that render him a more formidable foe than the sum of his class levels. Once again, communication with the obsessed man is lavishly detailed – and defeating him does not end the threat, which only ends once the PCs deal with the idol in a permanent manner and defeat the evil within once and for all. Oh, and yes – the PCs better not dawdle, for Henry’s ritual is a ticking clock…

Editing and formatting are very good, I noticed no significant glitches. Layout adheres to AAW Games’ beautiful 2-column full-color standard and the pdf comes with a blend of stock and original art, the latter of which is pretty awesome. Cartography is solid and in full color and comes with player-friendly versions. The adventure comes fully bookmarked for your convenience.

By all means, I should hate Jeffrey Gomez’ Ruins of Gilead. The paranoia-expedition and its tropes are almost by-the-book pulp tropes and indeed, if you subtract the rules, you could arguably play this in ANY setting, even a real world one à la CoC. This module does not reinvent the wheel – but it does sport something I thoroughly enjoy about it – an excellent pacing. Never is an investigation lagging, no dearth of clues – the module runs like a pretty smooth and well-oiled machine and quickly delivers what it sets out to do. Add to that the nice tidbits, from the ability to use the terrain to negate the threat of foes to some iconic imagery and variants and I, surprisingly, actually enjoyed this module far more than I anticipated. It also ran smoothly in an easy 6-hours playtest, though slower groups can probably take up to 4 sessions, depending on the pace set by the GM.

In the end, this is clearly a nice little love-letter to the pulp-genre’s classic tropes and showcases a promising author from whom I most certainly would like to read more. My final verdict clocks in at 4 stars, with an explicit recommendation for less experienced GMs who have an issue with improvising NPC-interactions.

You can get this nice, pulpy module here on OBS!