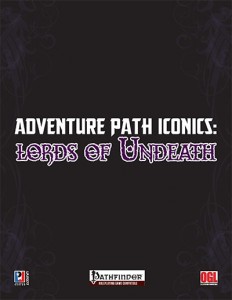 What do we get herein? Well, essentially – pregens. Pregens using the unique character options that have been introduced in Obsidian Apocalypse’s more recent offerings. The pregens are provided as 20-point-buy characters, with information on increase and decrease to the established 15- and 25-point standard. Each character comes with a per se well-written background story and advice on level progressions.

The first character would be Alberdeen, an uzamati (not uztamati, as the pdf one time puts it)magus who is suffering from seeing the state the world is now after the apocalypse. He is pretty much a standard magus, set apart only by the race – longsword? Check. Shocking Grasp? Check. Not much to say about him.

The second character would be Joa, a flesh promethean barbarian that could have come directly from a Tim Burton movie – were it not for the great and rather nightmarish story – for the body in which Joa was re-created is that of a patchwork woman, while the spirit within identifies as male. Bravo for tackling this taboo topic.

Mixer, the clockwork promethean alchemist provided herein, is, unsurprisingly, asexual, being a brain in a jar on a clockwork body – more interestingly here would be the awesome, chilling narrative on HOW the amoral being of mixer came to life – and no, I am not going to spoil how, just that shoving fragments of vials into eyes and a self-lobotomy are involved. And yes, this constitutes my favorite background story. The clockwork promethean’s (overly) powerful traits are somewhat offset by an uncommon focus on melee.

The final character herein would be Siriah, a raijin cavalier and powerful force of vengeance created from tragedy. Siriah is by far the most powerful of the characters herein, btw. – with greatsword, lance and raijin abilities, she surpasses the other characters.

Conclusion:
editing and formatting are okay – the pdf does sport a bunch of glitches, though – from not being able to decide on how many Rs there are in Siriah to bolding errors and cut-cop-paste glitches in the point-buy boxes, this pdf could have used a closer glimpse. Layout adheres to Obsidian Apocalypse’s two-column standard with a gorgeous full-color artwork for each character. The pdf has one bookmark per character.

Alexander Augunas’ pregens here are varied and this pdf does sport my favorite pregen background story EVER, so that would be something going for this pdf. Now that being said, this pdf does suffer from the base-races used to make the content here not being perfectly balanced among one another. The difference in power-level of the characters themselves is exacerbated by the difference in racial power-levels, so take these with a grain of warning.

I am also not particularly excited about this pdf not working as stand-alone – the cool builds utilize rules of the non-standard races, that’s the premise. But without the proper book, one has an issue playing e.g. the raijin – or the other characters. The immunities granted by subtypes and races could have used a brief explanation -that way, this pdf could have served as a kind of teaser for the proper racial books while being self-contained. As provided, this is one of the weaker API-installments, with editing glitches etc. rendering this less compelling for me than I expected. If you already have the OA-books and want pregens, you should be aware of the different power-levels and assign pregens accordingly to player capabilities.

In the end, my final verdict will clock in at 3.5 stars, rounded down to 3 since, the +0.5 stems primarily from me really loving the prose.