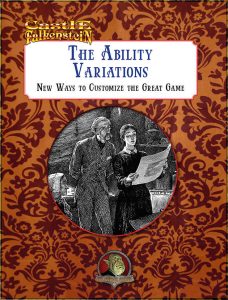 This supplemental rules-pdf for Castle Falkenstein clocks in at 11 pages, 1 page front cover, 1 page editorial/ ½ page of SRD, leaving us with 8.5 pages of content, so let’s take a look!

So, after a brief framing narration by Tom Olam (which resurfaces in the respective sub-chapters), we begin with the first of several tweaks to the base engine of Castle Falkenstein – in this instance, we’re introduced to the Specialization variant: Instead of general Ability capabilities, the system allows you to take a Good or Great ability and trade it in for Specializations, a number equal to ½ the value of the traded ability, with Good being worth 3, Great being worth 4 specializations. Specializations can be applied to any Ability in which the character is Poor or Average – the specialization increases the Ability by one step for the purpose of performing Feats that relate to the Specialization in question. Thankfully, a massive table (greater than 1 page!) provides sample specializations and also provides synergy with the great Tarot Variation suits – so no, you’re not left guessing regarding how narrow you should design Specializations. It should also be noted that compatibility with Comme Il Faut is maintained.

The second variation featured within the pdf would be the divorce variation, which once again features compatibility with the Tarot Variation. Each Ability is governed by a playing card suit, but with this variation, the Abilities allow for players making an argument of why a given suit may apply its bonus to a given task – in two variations: Half and full value. There is some value in this – you will probably be able to perform at an increased efficiency. However, while the Host remains the final arbitrator of what you can do, I really don’t like this one – it smells of FATE and competitive BSing to me, but, obviously, your mileage may vary and thankfully, we are the final instance that decides which of the rules herein to use and which not to – this will find its fans and it makes the game easier and while, as a person, I don’t care for it, as a reviewer, I can appreciate its appeal.

The final variation would be the improvement variation: In this variation, dramatic characters improve by spending Improvement Points. Hosts are guided in detail: You determine Deeds during the adventure, a kind of important waypoint and determine an Improvement Point value for such Deeds. Beyond the confines of adventures, dramatic characters may try to earn Improvement Points via Resolutions, which can be completed, but take time to complete, with each character getting one of these – the Resolutions can be similarly broken down into Deeds, with samples provided. The resolution allows, in a way, for downtime activity: Players really invested in their Dramatic Characters can thus be rewarded for e.g. writing copious amounts of prose – or you can simply control character power thus or provide an illusion of cohesion beyond the confines of the gaming sessions.

Once earned, Improvement Points can be spent to improve Abilities (cost being equal to the Ability’s new value). When also using Specializations, they can be used to purchase Specializations, which cost 6 points. An alternate for faster growth of dramatic characters can also be found, with decreased costs – and since the metrics are pretty simple, tweaking the variation remains very simple. If you’re concerned about justifying Improvement in-game, the pdf does provide guidance in that arena.

Editing and formatting are top-notch, I noticed no significant glitches. Layout adheres to fat Goblin Games’ elegant, really neat 2-column full-color artwork. The pdf features fitting stock-art and sports no bookmarks – due to its brevity, it does get a pass there.

Mister J Gray LOVES Castle Falkenstein – as much becomes evident in every single of his supplements. The means by which this establishes a continuity with the venerable original Castle Falkenstein books is amazing, and so is the quality. The variant rules presented herein for a measly buck allow you to tweak the playing experience very well and net an interesting array of customization options for the game. I hope the Talsorian-crew reads these reviews and lets the Fat Goblin Games-crew update the Castle Falkenstein-core books in a new edition – if anything, all these variations really make me crave a big, new and shiny book. This is a fun offering, it is VERY inexpensive and thus gains a final verdict of 5 stars.

You can get these cool variant rules for a single buck here on OBS!