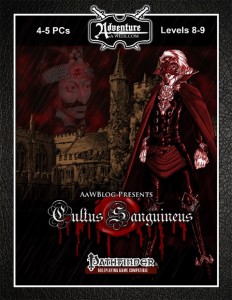 So, what do we get here? Well, essentially, we get a small collection of thematically-linked encounters – think of them as pretty much a kind of sandbox to fill out: You get the key-scenes and fill in the rest. Got that? All right! As such, the following obviously contains SPOILERS. Potential players should jump to the conclusion.

Still here? All right! Countess Veresovich and Count Krev Ragata have been up to no good: Finding a set of dread scrolls during her travels, the countess plans to conjure forth a powerful entity – alas, and thankfully for the Klavekian metropolis of Mohkba, the players are involved. In the mean and gritty streets of a less savory neighborhood, the PCs witness an obviously incognito noble, said Count Ragata is stabbed and robbed right in front of the PCs – as they navigate the dark and rather gritty (and lavishly-mapped) alleyways of Mohkba, they hopefully manage to track down the assailants and avoid falling to the haunt -in the aftermath, they are invited to nothing less than Veresovich’s masquerade ball – perhaps even keeping a mask as suggested by the count.

The masquerade ball itself can be considered a nice array of read-aloud texts and socializing. In any way, the masquerade will probably feature the items sanguineus, now assembled. A set of 3 magic items that collectively can transform the wielder into a vampire also feature herein…though oddly, the countess seems to vanish from the ball and when suddenly, walls of force supplemented by lethal blood vortex haunts lock down the house, things get ugly fast. The assembled nobles find out, the hard way, that the countess is not to be trifled with, as the floor of the ball room collapses and dumps them below the house…

Seeking of the house – there is a nice miniature map, but I don’t get why we don’t get a properly-sized map – as provided, the map is the one herein you can’t properly use. And yes, the caverns below the house also sport a proper, big map – once again, just as useful as the one for the alleyways. So what is going on down in those nasty caverns – well, the countess’ is currently engaging in the massive slaughter required for her ritual’s success. In order to stop her, the PCs not only have to brave her cultists, they may also have to deal with allies foolish enough to wear the sangineus items and perhaps the vampiric Count Ragata, all while moving past massive blood pools filled with leech swarms – oh, and if you want to – this final encounter does sport mass combat between trapped nobles and cultists – oh, and yes, the daemon the Countess seeks to summon is part of the deal, as are even more, nasty haunts.

Thematically fitting traps further complement this supplement, as do valid pieces of advice regarding mass combat and when to use which rules and the same goes for social encounters.

I should also not fail to mention the presence of multiple magic items, all with significant descriptions, beautiful full-color renditions and lore-sections.

Editing and formatting are very good, I noticed no significant glitches. Layout adheres to a beautiful full-color 2-column standard and the pdf comes with quite a few gorgeous full-color artworks. The cartography is very good and evocative, though I really wished the mansion-map had also been featured in one-page-size to actually be printed out.

Mike Myler, Jonathan Ely, Justin Andrew Mason, Rory Toma and Brian Wiborg Mønster deliver a damn cool vampire-themed set-up of encounters and set-pieces. The encounters themselves are great – every one of them, ultimately, can be considered fun and uncommon with at least one or more neat options/ideas per encounter. That being said, at the same time, this pdf does feel a bit like it has an identity-crisis.

I can get behind the format of roughly, thematically-linked encounters to flesh out – I actually like that. At the same point, this pdf left me feeling somewhat confused regarding the transitions and how the whole master-plan connects – essentially, what we have here is a GLORIOUS adventure, a superb investigation…that was not fleshed out. If you are familiar with The Skinsaw Murders: Think about the Sanitarium Encounter going to the Farmstead going to the Clocktower. You just feel constantly like the sinews that connect an awesome storyline are missing. Now this is partially due to the format, granted, but in this case, it frustrated me to no end.

Why? Because this is a supreme set-up of glorious encounters that get the gorier aspects of horror downright perfect in flavor – the encounters are FUN. The atmosphere is great. The adversaries are cool and the same goes for traps, haunts and items – but in the end, what we get here is a sketch – a sketch of something awesome, but a sketch nonetheless. The encounters do NOT need a fully fleshed out connecting thread – but they imho would benefit immensely from an actual structure being presented to the GM.

A capable GM can make this a full-blown 3-part adventure saga, perhaps even a full-blown AP, and it is inspired in what it delivers – but I wished its components had been connected better. Essentially, we get three set-pieces that are almost required to be run in conjunction, and still, we are left wondering about the transitions and left with a feeling of lack- when a short break-down of the plot, some structure to guide from encounter to encounter and expansions would have made this a legendary 5 star + seal of approval module.

As provided, this is a nice compilation, yes, but one with opaque villain motivations and structure that is held back from true greatness by being too story-driven and unique to work as disparate drop-and-forget-encounters, by being too adventure-like for being a disconnected encounter-collection, and by not providing enough connecting narrative thread for a collection of linked encounters.

Conversely, if judged as an adventure, even as a skeletal sandbox, it feels too unstructured to make the most of its great premises. I figured that running this as written would change my impression – alas, it didn’t, it only made me wish more that this had been a full-blown gothic horror saga.

For scavenging purposes, this is an excellent buy, but as a sourcebook or as a DIY-module-toolbox, it falls behind the potential of its easy 5-star-premise. So, if you’re looking for some bloody material to craft with, take a look, you won’t be disappointed – if you want a full-blown module or drop-and-forget encounters, you may wish to look elsewhere. Still, this remains a solid pdf, one I hope will one day be made into its own, complex, investigation-heavy horror AP. For now, my final verdict will clock in at 3.5 stars – and since I am a fanboy of all the themes evoked, as a person, I will round out. As a reviewer, though, I think I need to round down.

You can get these encounters here on OBS!
Endzeitgeist out.