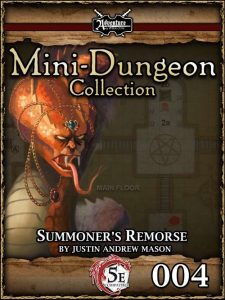 This pdf clocks in at 2 pages and is a mini-dungeon. This means we get 2 pages content, including a solid map and all item/monster-stats hyperlinked and thus, absent from the pdf, with only deviations from the statblocks being noted for the GM. Unlike the first three 5E Mini-Dungeons, this one does not come with VTT-maps or player-friendly iterations, which is a bit of a bummer.

Okay, so recently, villagers have been kidnapped by a nefarious cult, HEL-bent (haha) on rescuing a dark naga from the limbo of HEL via terrible human sacrifice. The mini-dungeon kicks off by a maddened villager slitting his throat in front of the PCs, thus conjuring forth scarab swarms – 3 scarab stones need to be destroyed in the complex to thwart the scarab swarm-controlling cult in a surprisingly atmospheric, dark module that has an atmosphere I did not expect to see in this series.

Now, conversion-wise, hyperlinks this time around are mostly consistent – apart from a potion of speed, a potion of heroism and the scarab of protection the links are all consistent and lead where they should. That brings me to one aspect, however – the scarab was a legendary item last time I checked and as such may be a bit too much for the level of the module for some groups

Editing and formatting are very good, I noticed no significant glitches apart from an acolyte being referred to as an adept in a conversion relic. Layout adheres to a nice 2-column full-color standard and the pdf comes sans bookmarks, but needs none at this length. Cartography is full color and surprisingly good for such an inexpensive pdf, but there is no key-less version of the map to print out and hand to your players. Stats, as mentioned above, obviously are hyperlinked to the SRD.

Justin Andrew Mason’s module was converted rather neatly to 5E by Kyle Crider – the conversion was done rather well and provides a challenging, but fair and atmospheric module that ranks among the better of the early mini-dungeons. While the lack of player maps is lamentable, this still is very much worth the price of admission and should be considered a worthwhile addition for 5e-groups. My final verdict will hence clock in at 4.5 stars, rounded up due to in dubio pro reo.