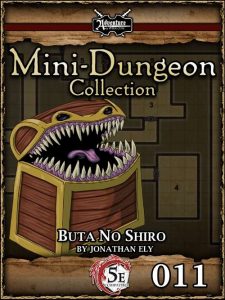 When the PCs enter a certain town, they will end up on the hit-list of the reason of the local crackdown on any crime – a warthog-headed rakshasa has taken it upon himself to use his mind-reading powers to aid a local magistrate. To put a stop to the evil creature’s machinations (before they end up on its hitlist…), the PCs have to infiltrate the hidden complex of the rakshasa, where devils, shackled angels, a decadent harem and, of course, the dread mastermind behind the law-force’s current inefficiency loom.

Conversion-wise, the creature-choice is consistent, but I wished some of the Strength DCs and Dexterity DCs to deal with different obstacles would have been a bit more diverse – it’s DC 20 for both all the way. The pdf also has an uncharacteristic amount of hiccups that show up in the hyperlinked words – but curiously not all of them: “mimicmimic”, “everburning torchescontinual flame torches” and the like – something that could have been caught even by casual checking. Big let-down there.

Editing and formatting are not up to AAW Games’ usual standard – the doubled words are weird and could have easily been caught. Layout adheres to a beautiful 2-column full-color standard and the pdf comes sans bookmarks, but needs none at this length. Cartography is full color and surprisingly good for such an inexpensive pdf. The pdf does sport one nice piece of original full-color art – kudos! The cartography, with player and GM-VTT-maps, is nice.

Jonathan Ely’s Buta No Shiro is his first mini-dungeon I really enjoyed when it was released for PFRPG back in the day – not only is the premise awesome and cool, the complex’s location is left deliberately opaque and the diversity of foes herein is also neat. Beyond that, smart tactics for the villain and nice prose render this a good mini-dungeon, content-wise. Alas, the formal criteria and conversion this time around aren’t as impressive – Kyle Crider can do better. My final verdict will clock in at 3 stars.