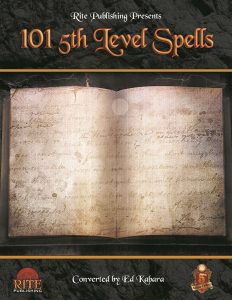 This collection of spells clocks in at 37 pages, 1 page front cover, 1 page editorial, 1 page SRD, 1 page back cover, leaving us with 34 pages of content, so let’s take a look!

This review was moved up in my reviewing-queue as a prioritized review at the request of my patreons. I did receive this pdf prior to public release in order to allow for a speedy release of the review.

We begin this supplement with massive lists of the respective spells by class, before moving on the alphabetic presentation of spells. Now, obviously, I can’t go through each and every spell contained here, but I’ll try to give you a good idea of what to expect. Let’s begin with the first spell, alter metal. This spell modifies the damage threshold of affected objects and is particularly potent when affecting armor etc. – the spell properly differentiates between attended and unattended, magical and nonmagical and even intelligent items. Kudos. Fans of Diablo and similar franchises will also enjoy a spell, which renders skeletons into ticking shrapnel bombs.

Now damage spells herein generally sport a valid alternative and contextualization compared to core spells. Take e.g. arrow storm. The spell inflicts 8d6 piercing damage to all creatures within 30 ft. of a point in range (150 ft.), potentially inflicting the restrained condition as well on a failed save, necessitating cover or a Strength (Athletics) or Dexterity (Acrobatics) to end the condition. The affected area may be farther away than e.g. that of cone of cold, but the PHB’s spell affects a larger area, has a slightly superior damage type and, with d8 damage-dice, a slightly higher average damage output. In another example, namely force ram, we have 12d4 damage and an unerring, automatic hit – but also the danger that shield completely negates the spell.

There also are utility type spells herein – or spells that you’d consider to be more relevant for the purpose of the more narrative aspects of the game: The befoul spring ritual can, for example, taint a water source. Bitter vintage can render wine into poison, with the caster gaining several different options regarding which poison to transform the vintage into. And yes, the transformation may be detected by savvy PCs. On a minor complaint regarding the formatting: The “At Higher Levels.” Has not been bolded and italicized properly here. There are spells like blood to sap – the spell deals poison damage on a failed Constitution saving throw and poisons the target for the duration, which reduced the target’s speed and imposes disadvantage on Dex saves, but also provides an AC bonus. Regarding damaging spells that also impose negative conditions, it is nice to observe a lack of save-less spells and the fact that the conditions and their potency receive the respect they should have. The pdf does sport some evocative visuals in the damaging spells it has, e.g. in brimstone cloud.

Campfire lullaby is interesting, in that it allows a character to get the benefits of completing a long rest more than once per 24 hours – the long casting time and duration and the caveat that lets it affect a character only once in 5 days act as good balancing mechanisms for this potent spell, though. There are carpets of fire and options to chastise foes with psychic damage. There is a means to generate circles of moonlight, protection against shapechangers and the undead. The pdf also sports a contingent healing spell, which is neat – and yes, these cannot be stacked…and they can be used offensively versus the undead. There also is a long-range curing spell – which is pretty cool, aye, but considering the impact of long-range healing on the game, it deserves to be noted that it may not be for all groups. Speaking of which: Eternal charm is permanent. Whether or not you like the ramifications of this depends on the type of game you run.

Sifting through thoughts via crystal probe, cursing targets with narcissism…what about changing the look of terrain and hiding it from the prying eyes of enemy spellcasters? There is also a powerful spell to compel targets to deliver messages for you. You can conjure forth earth barriers that bludgeon those foolhardy enough to attack you. Elfhome attunes an area in forests to elves and creatures, providing climb speed and quicker movement. What about first conjuring a tree and then having it fall on enemies? Really cool: Flatten makes you two-dimensional. Guard Dog conjures forth a variant dire wolf with modified stats to guard an area and the knave purge ritual provides a type of magic protection against thieves. Minor complaint – spell-references in the text tend to lack the italicizations.

We can find one-way pain circuits, the ability to travel through stone, several pahnatsms (lichs, nymphs, swarms…) – there are a lot of spells, some of which provide significant changes to the engine: Take remove condition, for example: The spell can even negate instantaneous effects like petrification via magic and may end the attunement to a magic item causing the condition, though curses are maintained. Now personally, I like this for the ability to make more controlled use of items with big drawbacks, but it does remain an aesthetic preference. Speaking of spells I like: Scry reverse does exactly what you’d think it does. I like the tactical option, but I can see some Gms not being as in love with it.

There also would be a powerful spell that requires the willing sacrifice of a mortal being to enhance your powers – suffice to say, that one is evil to the core. Potent songs that suppress spellcasting and magic item use make for amazing tools in the arsenal of bards – really cool. Spell grounding is a very potent defensive option: While within the range of a spell that does not have a range of touch, you may use your reaction to negate the spell, ending all effects and damage. No check, no differentiation between spell levels, no discharging of the spell – personally, I believe that this should have an “At Higher Levels”-scaling for maximum spell level affected and it should also have some wording regarding interaction of enspelled terrain into which you move – which imho should be exempt. While it is clear that this is supposed to work only for rays and chains, RAW, it is much more flexible, depending on your reading of the spell.

Editing and formatting are good, bordering on very goo: I noticed a couple of missed italicizations and a few rules-language points that could be slightly clearer, but, as a whole, this is a well-made supplement. Layout adheres to Rite Publishing’s two-column full-color standard and the pdf sports fitting full-color artwork, mostly stock. The pdf comes fully bookmarked for your convenience.

Ed Kabara’s conversion of Steven D. Russell’s classic spells does a valiant job at translating the vast plethora of spells to 5e. As a whole, the balancing of the material herein is pretty tight. The spells generally fit their respective levels. There are some spells that change how some aspects of the game work, which may be a matter of taste. Beyond the few hiccups herein, there is one aspect to be aware of: 5e sports less flexibility with the spells offered than PFRPG – spells have a higher value in direct comparison, often being entwined, availability-wise, with class features or feats as a kind of pay-off. This book does not provide the like or a means to contextualize the spells themselves – it literally only presents a ton of spells. Just putting them all in the game will, by necessity, generate a power-increase, courtesy of the increased flexibility. This is not bad, mind you, but something 5e-GMs should nevertheless be aware of.

As a whole, I consider this collection of spells a good example of how Rite Publishing has stepped up its 5e-content’s quality – of all the spell-collections I have read so far, this is by far the most refined. All in all a worthwhile collection of spells to grab and choose from – my final verdict will clock in at 4 stars.