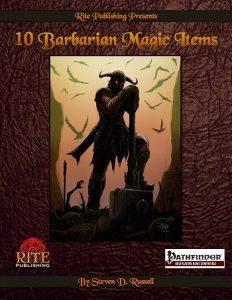 This installment of Rite Publishing’s 10-X-series clocks in at 9 pages, 1 page front cover, 1 page editorial, 1 page SRD, 1 page advertisement, leaving us with 5 pages of content, so let’s take a look!

We begin this pdf with two new special qualities: Armor and shields may benefit from the +2 bonus equivalent adversity’s bulwark enchantment, which allows for the immediate action-based expenditure of 6 rounds of rage to reroll a save against a debilitating condition (excluding death), affliction, charm or compulsion. The barbarian must take the second result. If the barbarian also has the eater of magic rage power, he gains temporary hit points equal to the originating creature’s CR that stack with the rage’s temporary hit points. Weapons can be enchanted to gain the felling storm special weapon ability, which allows the barbarian to add a combat maneuver as a swift action 1/round to a successful attack while raging, providing, just fyi, synergy with the maneuvers introduced in Secrets of Adventuring. This enchantment should, for balance’s sake, be limited to melee weapons or at last have a price that exceeds +1 for ranged weapons.

So that would be the general enchantments, now let’s move on to the items: As has become the tradition with these pdfs, we actually get more than ten items: 5 of the items in this book come in 3 degrees of power: Lesser, standard and greater, and these higher power-levels do not just simply feature a numerical escalation. The Ring of Spiritual Spite allows wearers to expend rage as immediate actions to reduce damage incurred, but only if said damage is drawn from spell, supernatural or spell-like abilities, as well, as the example illustrates, from bonus damage caused by e.g. the flaming special quality. While rules language could have been slightly more precise, the example clears up all gripes I could field here. Higher power levels equal a higher amount of daily activations. Mantles of thorns provide minor natural armor bonuses and reflexive damage for those foolish enough to target the character with unarmed or natural attacks, with higher iterations allowing for more activations per day.

Boots of the Wild Rush would be a better example to illustrate aforementioned differences in power-levels: The lesser variant allows for the expenditure of a swift action to increase base land speed by 10 ft., with each step above that increasing this by a further +10 ft. Standard versions allow for the expenditure of 3 rounds of rage to ignore natural difficult terrain and the greater version allows for rage-powered short range flight!

Bracers of Epic Deeds provide synergy with Surge of Strength and allow for all those fun over-the-top Conan-esque capers via significant Strength-check, CMB or CMD enhancements, but only 1/day. Standard bracers have synergy with the unexpected strike rage power and allow for 1/day AoOs versus foes that move into a threatened square and the greater version allows barbarians to disable temporarily, via a special combat maneuver, special monster abilities like gaze attacks and the like – thankfully with a GM-caveat, but oh boy, how cool is THAT?

Similar to that, the lesser version of gauntlets of the breaker allow a barbarian to temporarily disable natural attacks. The standard version makes the barbarian better at wrecking objects and the greater iteration allows the barbarian to seriously impede armor, even natural armor, for a while and limited amounts of time per day. Unlike the bracers, here the progressively better iterations do increase the daily uses of the lesser versions.

Not all items herein feature such a 3-step-version: The Baldric of Restraint nets Quick Draw and lets the barbarian, as a swift action, expend rounds of rage to heal 1 hp per round expended. The helm of the nomad lets the barbarian expend a swift action to perform a smattering of skills that round reliably, counting as having taken 10. Additionally, 1/day, the item allows the barbarian to treat a skill check of the skills in question as a natural 20. As a nitpick: The helm is erroneously referred to as a belt once. That’s a cosmetic glitch, though.

If you’ve been following the series, you’ll know the star of the pdf is still coming: Made out of the new material Primal Iron, which counts as cold iron: The Fell Hammer, a massive earth breaker forged by legendary Kahrvass Fleymbrow (see Faces of the Tarnished Souk-series) that begins as a +1 primal iron earth breaker that provides a serious Intimidate bonus. At 3rd level and every 3 levels thereafter, the massive weapon may be enhanced, gaining first a bonus while the wielder is raging, then an upgrade to +2 (and bonus damage while raging!), shaken added to crits (with a 24-hour-caveat to avoid shaken-locks), teleportation-hampering (missing an italicization for a spell) and finally, the option, via Hammerfall (*puts good ole’ “Templars of Steel” in the playlist*) to generate a frickin’ storm blast that deals serious damage (damage type would have been nice) and blows foes away, extinguishes flames, etc. EPIC.

Editing and formatting are the pdf’s weak spot: While the rules-language is exceedingly precise and manages to deal with even complex concepts, there are a couple of minor formatting glitches and punctuation hiccups, though none of them impede the rules themselves to a significant degree. The one missing damage type is the only one of the glitches that is rules-relevant, and it is a minor one. Layout adheres to Rite Publishing’s two-column full-color standard and the pdf has gorgeous full color artwork I haven’t seen before – particularly impressive, considering the low asking price. In spite of its brevity, the pdf comes fully bookmarked for your convenience – kudos!

Steven D. Russell, may he rest in peace, has written barbarian items here that exemplify exceedingly well what made me a Rite Publishing fan back in the day; there is not a single cookie cutter, bland item in this pdf. Each piece of content you get is evocative, fun and has a serious justification for existing…in fact, reading the pdf will probably make any barbarian player salivate over at least one item; quite frankly, a lot of them. With the equipment herein, the feats of Strength and daring we came to love from the Conan comics become possible. And unlike in some of Steve’s previous installments in the series, I have no complaints pertaining balance and pricing this time around.

Indulge me for a second, will you? This was hard for me to write. I was literally afraid of the pdf, since it was the last stand-alone pdf Steven wrote that he published. I really didn’t want to bash the pdf, knowing how recently, I had to criticize some of his writing. I shouldn’t have worried. As always, when someone observed valid gripes, Steven didn’t grumble (for long) – he fixed it. He improved. In short – this pdf is bereft of anything I’d consider problematic. Furthermore, it has this signature quality, this design-voice I will sorely miss; the voice that speaks with flavor and has the crunch to back it up, that lets you do the cinematic, iconic things you wanted to do; that makes roleplaying supplements, even when they’re just accumulations of crunchy items, fun to read.

Oh, and there’s that they are mechanically innovative. Did you know that Steve was the first designer to use barbarian rage or bardic performance as a resource to power unrelated effects, feats, etc.? That I encountered magic items with scaling save DCs first in his writing? These are so normal right now, it seems odd…but yeah. So yes, we have significantly more than the promised 10 items on the cover; we have items that directly interact with class abilities and resources of the class. And they do all that while being items you really want to have. This is the antithesis of slapping just a plus and some qualities together. This is fun, evocative and innovative. And I, personally, am grateful for this pdf and what it brings to my table. The hiccups in editing pale before this creativity and with the low price, I can still rate this 5 stars + seal of approval, even when I turn off my emotions and just become review-bot 9000. This is a must-have for barbarian-fans.

You can get these thoroughly inspired magic items for a paltry $1.50 here on OBS!